Even as our trip came to a close, our days continued to be packed with programmatic sessions and historical opportunities to learn! We visited Tlholego, an ecovillage thriving to offer organic agriculture, educational programs, economic development and a model for rural sustainability in South Africa. There we immersed ourselves with the community and participated in team building challenges to deepen our group’s ability to work together.

Having visited various organizations and discussed an array of systematic and causal challenges across South Africa, our next task was project mapping individual Social Change projects to take home with us. Each of us were able to brainstorm and collaborate innovative ideas and plans to bring what we’ve learned back to our communities.

Our final destination was Johannesburg, also known as the city of gold. Jahdeem shared how our day visiting a few of the famous historical sites “was a special day for the group and possibly the most influential moment of the trip. Given the opportunity to visit the Apartheid museum, the group had a chance to gain a deeper insight to  some of the significant factors of South Africa’s journey to a so called “better” democratic government”.

We learned of the Student Uprising in Soweto on June 16th, 1976 and then visited the Hector Pieterson Square where the death of a young schoolboy is honored and celebrated as the turning point to end the former political regime. Jahdeem also shared this as “a climactic point for the country during their apartheid era as it made people aware of the racial and class discrimination. We received the opportunity to learn the impact Nelson Mandela had on the country and its generations, along with many other influential leaders who have brought action in order to change the course of their nation. Mandela and his contemporaries are all true definitions of leaders, as they displayed qualities of what leadership is and what risks and challenges every individual is capable of performing but many are of taking advantage of”.

In close, the EIL 2018 Social Change and Leadership Program in South Africa was inspirational, empowering, and transformative for all those involved. A few of our students sharing the Social Change initiatives they created while at Tlholego Ecovillage. 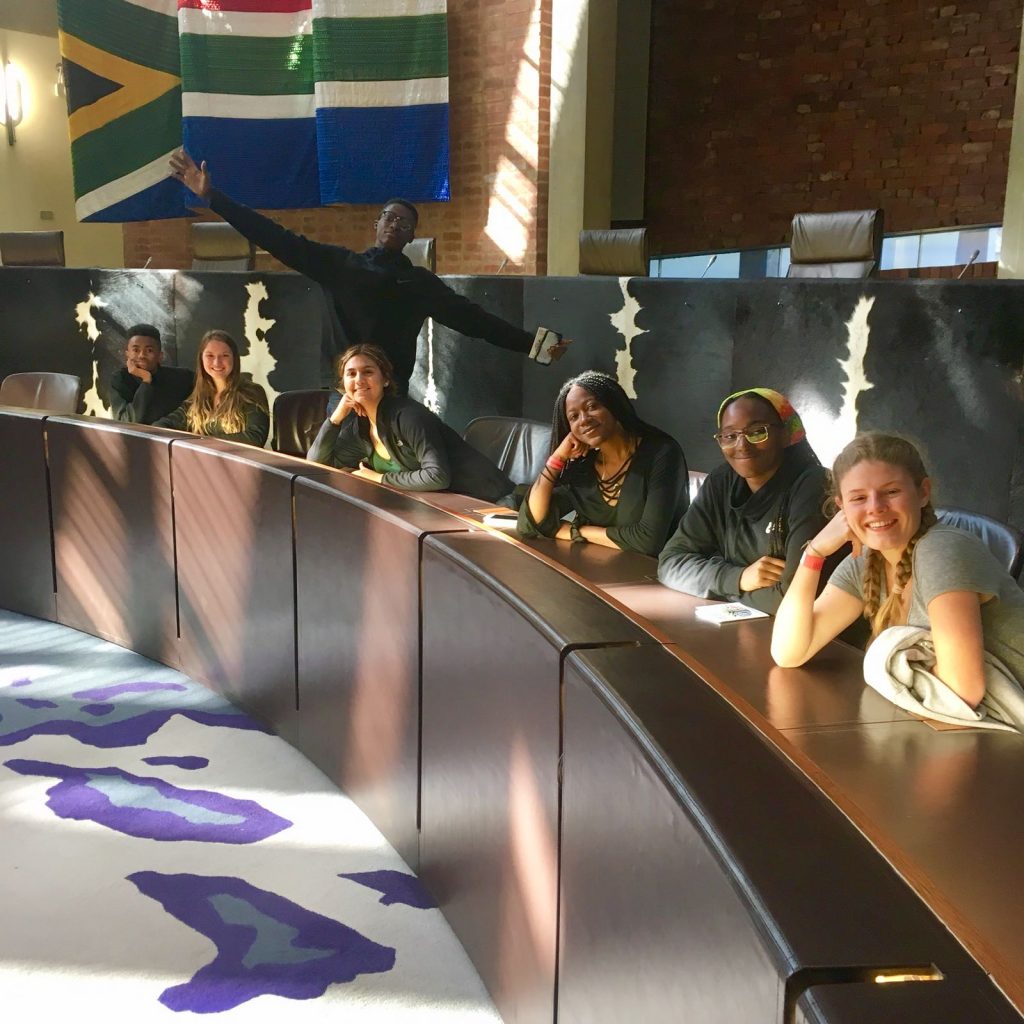 Half the group sitting in the judge’s chairs at the Constitutional Court of South Africa. Upon entering the Apartheid Museum, each student received a ticket that randomly classified them as “white” or “non-white”. Farewell dinner at Moyo, in Johannesburg.